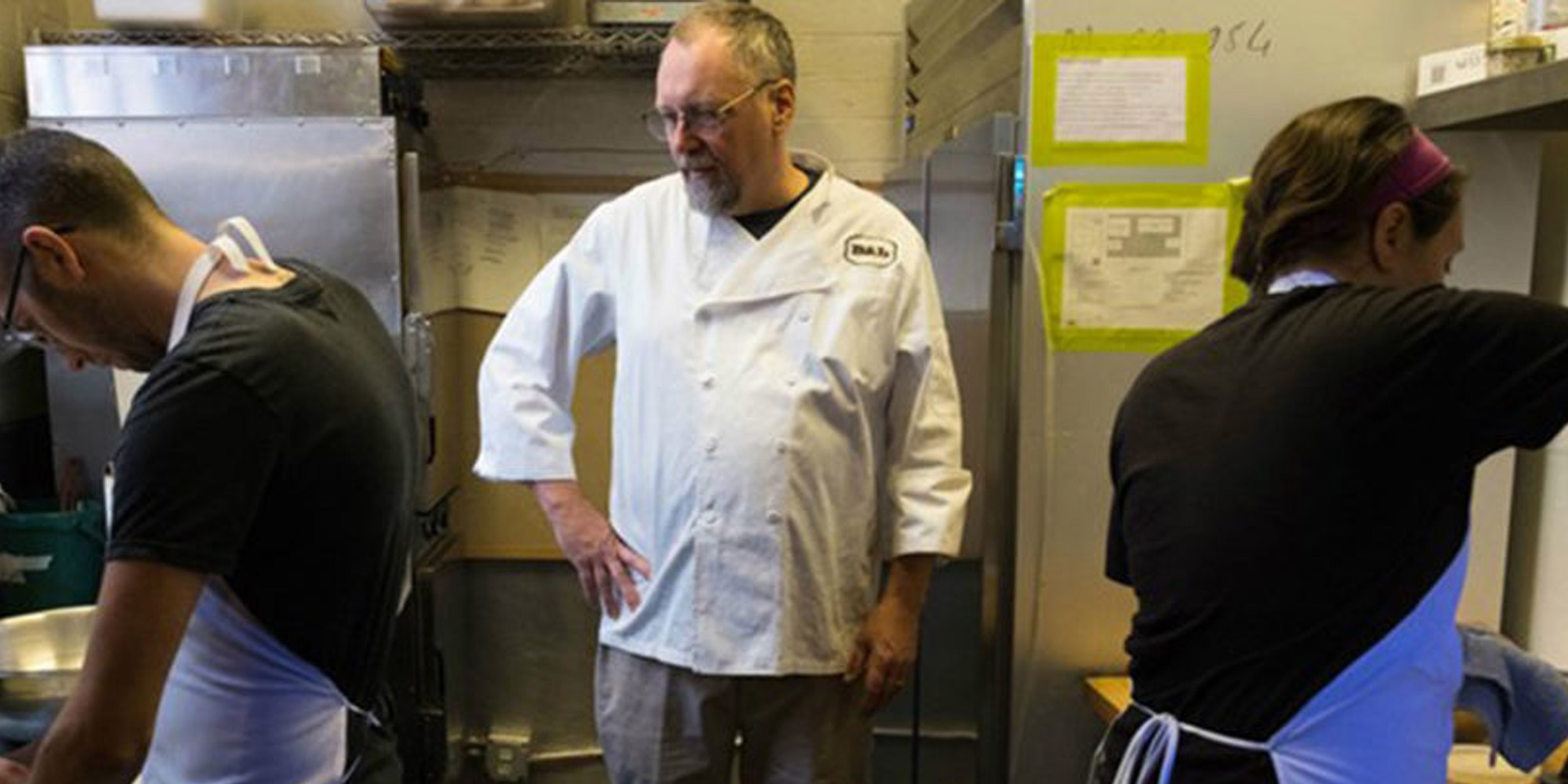 Go to article, and listen to the radio segment, here.

At six-foot-three, Patrick Mulvaney is a commanding force in his busy Midtown kitchen. As staff make preparations for a large dinner crowd, the chef strides through the restaurant’s narrow back hallways, where the scent of roasted chicken wafts over dishwasher steam and clanking cookware. His gravelly speech is peppered with curse words, and he’s quick to make adjustments to a tray of hors d’oeuvres or a specialty cocktail.

But even when it’s chaotic, he says the servers, cooks and bartenders treat each other like family. And as “captain of the pirate ship,” as he calls himself, he says it’s his job to make sure they’re staying afloat in the chaos.

The chef has made a name for himself in the local and national culinary scenes, both for his widely praised farm-to-fork menus and for his leadership on causes such as homelessness and domestic violence. Now, he’s channeling some of his energy into suicide prevention.

“This is a place for me to help my people,” he said. “We are storytellers at the end of the day. And one of our stories is going to be about mental health”

Mulvaney said hot tempers in fast-paced kitchens and rampant drug use during and after business hours are often seen as the norm in an industry of “stress junkies.”

“You have to be f*cked up to work in restaurants,” he said. “There’s an acceptance that we’re an industry that takes misfits.”

That mentality deters some people from asking for help, even when they have a serious problem.

A 2016 survey of more than 2,000 restaurant workers from a national nonprofit called Chefs with Issues found that 73 percent reported suffering from multiple mental health conditions. A 2015 study from the Substance Abuse and Mental Health Services Administration reported that food service employees had the highest rates of illicit drug use compared to 18 other occupations.

So, Mulvaney is working with Kaiser Permanente, WellSpace Health, and the Steinberg Institute to roll out resources for struggling bartenders, servers and chefs. Earlier this year, he hosted a series of mental health first aid trainings to help restaurant workers learn the warning signs for suicide. He’s hoping to create an online portal where they can take an assessment and find treatment.

There are chefs working on suicide prevention all over the country, and if Mulvaney’s model gains traction, it could spread well beyond Sacramento.

Katherine Miller, vice president of impact for a national culinary nonprofit called the James Beard Foundation, has written about some of the pervasive issues in the restaurant industry — long hours in a busy environment, casual drug use, and the idea that stress is just part of the job.

She said what Mulvaney is doing on the mental health front could save lives.

“For a long time, it’s just not been something you talked about in this world,” she said of mental health. “Looking at a leader like Patrick, and having him stand up for this issue over all the other issues he could be using his voice for, means a lot. It shows young chefs in his own kitchens that it’s OK to talk about the issue, it shows his peers that it’s OK to talk.”

This resource list comes from the James Beard Foundation and chef Patrick Mulvaney. More chef-specific resources are available at chefswithissues.com.

Many Sacramento restaurant workers are already aware of this problem. Some are still grieving Zonca, and a bartender named Ben Moore who took his own life in August 2017.

Bartender Laura Bruce was a close friend of Moore’s. She still struggles to talk about his death.

“He was always like my big brother,” she said. “If something bad happened, he’d show up like, ‘All right, who am I fighting?’ He always took care of me.”

She said his death has made kitchen staff think more deeply about their co-workers’ mental well-being.

“There is this feeling you have to keep it all together, and if you can’t keep it together, there is something wrong with you,” she said. “People are becoming more comfortable asking for help when they need it. Whereas before they might wash it down, people are realizing now that mental health is important and it’s OK to be more vulnerable.”

Mulvaney hopes to see this shift continue. He wants every kitchen in Sacramento to have at least one person trained to look for signs of suicide, and to be able to approach struggling co-workers.

“What I want is someone to help us figure out how to have these conversations in a productive manner that increases mental health and reduces the stigma, so we talk about it more,” he said. “I want it to get better, for everybody. And I maybe want it to get better for myself, too.”

At Mulvaney’s B&L in Midtown, that designated person is Mulvaney himself.

The Project
What the purple
hand means.

Recipe Book
The training program for mental
well-being in the kitchen.

Reservations
Call us, fund us, join us.

The Pantry
Coping strategies and resources
for those in crisis.

In The News
See how IGYB is creating a buzz.

© 2023 I Got Your Back Project. All Rights Reserved.
Photos courtesy of DL Cunningham Photography.